zx%  =  the critical z-value based on the normal distribution and the selected X% probability.

σ = the standard deviation of daily returns on a percentage basis.

For example, to convert to a weekly VaR, multiply the daily VaR by the square root of 5 (i.e., five business days in a week). We can generalize the conversion method as follows:

With this expression, we can describe the relationship between the change in portfolio value and the change in the risk factor as:

The delta-normal method for estimating VaR requires the assumption of a normal distribution. This is because the method utilizes the expected return and standard deviation of returns.

Advantages of the delta-normal VaR method

Disadvantages of the delta-normal method

Advantages of the historical simulation method

Disadvantages of the historical simulation method

Advantages of the Monte Carlo method

Disadvantages of the Monte Carlo method

DEVIATION FROM THE NORMAL DISTRIBUTION #

Three common deviations from normality that are problematic in modelling risk result from asset returns that are fat-tailed, skewed, or unstable.

The second possible explanation for “fat tails” is that the second moment or volatility is time-varying. This explanation is much more likely given observed changes in interest rate volatility. Increased market uncertainty following significant political or economic events results in increased volatility of return distribution. 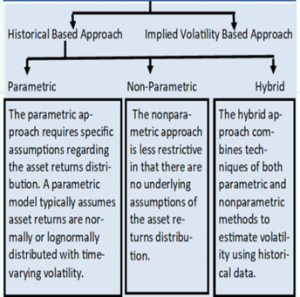 This is a time-series model used by analysts to predict time-varying volatility. Volatility is measured with a general GARCH(p,q) model using the following formula:

Historical simulation is a procedure for predicting the value at risk by simulating or constructing the cumulative distribution function of assets return overtime.

Under the historical simulation, all returns are weighted equally based on the number of observations in the estimation window (1/K).

The hybrid approach uses historical simulation to estimate the percentiles of the return and weights that decline exponentially (similar to GARCH or RiskMetrics.

The Taylor Series of order two is represented mathematically as:

The structured Monte Carlo (SMC) approach simulates thousands of valuation outcomes for the underlying assets based on the assumption of normality. The VaR for the portfolio of derivatives is then calculated from the simulated outcomes. The general equation assumes the underlying asset has normally distributed returns with a mean of μ, and a standard deviation of σ.  Advantage: It is able to address multiple risk factors by assuming an underlying distribution and modelling the correlations among the risk factors.

Disadvantage: In some cases it may not produce an accurate forecast of future volatility and increasing the number of simulations will not improve the forecast.

In times of crisis, correlations increase (some substantially) and strategies that rely on low correlations fall apart in those times. Certain economic or crisis events can cause diversification benefits to deteriorate in times when the benefits are most needed. A contagion effect occurs with a rise in volatility and correlation causing a different return generating process.

A simulation using the SMC approach is not capable of predicting scenarios during times of crisis if the covariance matrix was estimated during normal times. Unfortunately, increasing the number of simulations does not improve predictability in any way.

Stressing the correlation is a method used to model the contagion effect that could occur in a crisis event.

What are your Feelings

Still stuck? How can we help?

How can we help?

FALCON EDUFIN is leading FRM, CFA and CA Final exam preparation provider. With our unique approach we help students succeed in their exam.

Give Us A Call

Drop Us a Mail

GARP® does not endorse, promote, review, or warrant the accuracy of the products or services offered by Falcon Edufin of FRM®-related information, nor does it endorse any pass rates claimed by the provider. Further, GARP® is not responsible for any fees or costs paid by the user to Falcon Edufin, nor is GARP® responsible for any fees or costs of any person or entity providing any services to Falcon Edufin. FRM®, GARP®, and Global Association of Risk Professionals™ are trademarks owned by the Global Association of Risk Professionals, Inc.

Number of items in cart: 0